Eye donation: All about Donating Eyes As Shakespeare said, the eyes are, indeed, our windows to the world, and the windows to our soul.  Nowadays not all blindness is irreversible. Today, medical science has advanced enough to restore vision for a lot of these patients, who are struggling with day to day living because of the vision impairment. With the help of eye donation, people are helping other people even after their death.

Who can Donate Eyes

Our eyes can only be donated when we don’t need them, that is, after a person’s death. Those of us who wish to donate our eyes, after we die, we have to pledge them while we are alive.

Pledging your eyes is a noble act that ensures that your eyes will continue in helping someone else to see the world, even after you are no more. Eye Donation is perhaps the greatest charity of all and it is entirely voluntary. The eye donation of the deceased has to be authorized by the next of kin(a person’s closest living relative or relatives) even if the deceased has pledged his or her eye while being alive. The next of kin can also permit to donate the eyes of the deceased, even if he or she did not pledge to donate his / her eyes before death.

Can someone who has had surgery donate eyes: No rule says the cornea from eyes that have undergone any whether it is cataract surgery or LASIK surgery. Eyes can still be used for a cornea transplant. The healthy portions of the previously operated cornea can be used for the donation.

How are donated Eyes used 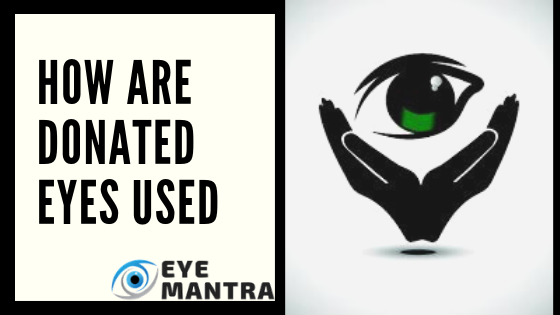 Traditionally each person who donates eyes can provide the gift of sight to two blind people. With the coming of component surgery of the cornea (in which layer of the cornea is transplanted for a specific indication) one eye has provided sight to five patients. When you donate a pair of eyes, you are enabling up to ten sight-saving operations.

All the eyes donated to the eye bank are used, and a record is maintained regarding them. Eyes that are not medically suitable for a corneal transplant may be used for medical research and education for teaching medical students. These “unfit” donated eyes provide the doctors with critical and valuable insight into many conditions of the eyes and can help to find the cure for several diseases that are considered untreatable.

Eye donation thus not only restores sight for the blind, but it also makes research into new treatments possible.

In addition to these, there are several eye banks run by private hospitals and charitable trusts, details of which can easily be obtained online.

What happens during eye donation

Once the eye bank is informed of the will to donate eyes, a team of trained personnel, along with an eye doctor and a grief counselor reach the house or hospital where the deceased has been laid to rest. The team of medical professionals will talk to the family and take a proper, written consent before proceeding with eye donation. They might ask some questions regarding the medical and family history of the donor. The process takes less than ten minutes from start to finish.

The team will work in privacy to harvest the donated eyes under strict aseptic conditions, very respectfully. The area where the team harvests will be restored to its original state within minutes by the eye care professionals with high regard to the feelings of the grieving loved ones of the deceased. The grief counselor helps the family in resolving any last-minute hesitations and questions, and thank the family for their act of charity, before transporting the donated tissue to the eye bank.

Usually, there are patients, waiting for eye transplants, in most hospitals, and therefore, most corneas are utilized within three to four days. Corneal and ocular donations remain viable for transplant for up to 14 days. The identities of both the donor and the recipient remain confidential.

What about religious beliefs

Some people fear their religion before donating their eyes. They think that their religion will prohibit the donation of the eye. No religion in the world condemns the art of giving. All major religions either accept organ donation or allow the right of individual members to make their own decision. Most beliefs are in favor of organ donation as acts of charity and as a means of saving a life.

Most of the patients who receive transplants are older since the most common cause of corneal blindness affects this age group. However, there are a lot of children and young adults who also benefit from corneal transplants.

Similarly, most of the donors are also elderly. Eye banks usually accept donations from donors between the ages of 2 to 70 years. As a rule of thumb, patients receive corneal tissue from donors approximately the same age or younger than themselves. Eye banks do not refuse any donations, but donations, from people older than 75 years, are usually used for research purposes.

If you are looking for a good eye hospital in Delhi. If your looking for any surgery related to eyes do visit our website Eyemantra. We offer various services like Retina Surgery, Cataract Surgery, Specs Removal, and many more.

A complete guide to good eye care in elderly